The damage caused to Ukraine by the war is enormous: about 26,000 buildings have been damaged or destroyed in Kyiv region only.

In order to ensure the reconstruction of the country, form evidence of war crimes and establish the amount of compensation from the russian occupants, first of all it is necessary to collect information about the scope of destruction, which is thousands of hectares.

To monitor the destroyed objects, Culver Aviation uses SKIF, a drone of the "flying wing" type of its own design. It has already collected information on the damage to two settlements in the Chernihiv region. The first in the list of damaged objects, which Culver Aviation specialists still have to investigate, are the villages that suffered most from the russian aggression. Here's how the company helps to collect data on the destruction.

Normally, Culver Aviation is engaged in aerial monitoring of land surfaces and high-rise sites. However, after the liberation of the occupied territories, it became clear that the digital data obtained through aerial surveys could be used to assess the extent of the destruction caused by bombing, rocket and artillery fire.

Understanding the importance of complete and objective data to form the basis of evidence of occupants war crimes and compensation for the damage caused, the management of Culver Aviation decided to join the initiative to document the destruction using drones.

Culver Aviation and the “russia will pay” project

Immediately after the de-occupation of Kiev communities SmartFarming and Vkursi Zemli initiated a volunteer project RebuildUA, designed to digitize, analyze and disseminate information about the destruction of Ukrainian infrastructure. The Kyiv School of Economics (KSE) soon joined the initiative and undertook to assist RebuildUA in calculating the damage caused by the occupiers.

From the very first days of the war, the KSE together with the Office of the President and central executive authorities of Ukraine have been implementing a project to collect, assess and analyze information on material losses caused by the war - "russia will pay".

The KSE team together with the World Bank and National Reconstruction Council of Ukraine developed the methodology and algorithms for the assessment based on the data collected and digitized by the RebuildUA team. The project is supported by USAID and involves partner organizations in damage analysis.

Culver Aviation joined the initiative and with the help of its own fleet of UAVs helps to record, analyze and assess Ukrainian war losses. The data obtained from SKIF drones, the company's specialists turn it into orthophotomaps, which will later become part of the created registry of damages and the aggregate database of material losses.

Together, organizers and partners should use the collected, digitized and analyzed data as evidence of war crimes of the occupiers to obtain reparations and compensation from the aggressor country and international financial aid for the reconstruction and restoration of Ukraine.

Challenges and Difficulties of Collecting Data in a War Environment

Despite the involvement of a large number of volunteers in the initiative, there is no equipment for aerial monitoring: almost all of it today goes to the front, besides, one of the largest supplying companies has left the Ukrainian market.

An important component in the process of damage assessment is speed: most of the damaged structures must be repaired urgently. The participants of the initiative must collect the data quickly and have time to put them in the general register of damages in order to get the possibility of international financial aid for restoration and to present the claims for compensation to the aggressor country in the future.

Not all photos and videos can be used as evidence. In order to build a common damage registry and an aggregate database of material losses, all files must meet uniform criteria. And, unfortunately, the quality of some of the images obtained does not always allow them to be used as evidence.

In addition, individual photos or videos are not data that can be handled systematically. To be able to use the information from the drone for further analysis, an orthophoto stitching plot must be made of the many photos that the drone takes during the flight.

The lack of necessary technology is also complicated by the fact that not all drones can collect the necessary quality of information or spend too much time on it. For example, the standard resolution of images produced by copters is 5-7 cm/pixel. To obtain images of better quality, their flight altitude must be reduced, which would result in spending almost twice as much time to fly over each area, which cannot be allowed under current conditions.

Culver Aviation has the ability to collect data quickly and spend much less time processing it. We develop and manufacture our own drones, and the SKIF UAV fleet is now the largest in Ukraine. Our own service allows us to maintain and expand the fleet of aircraft, despite external circumstances, to carry out research of any scale in a short time.

SKIF's technical characteristics enable it to take images with a resolution of up to 1 cm per pixel and to survey up to 1,500 hectares in one day. Culver Aviation team has experienced operators with real experience in drone control and its own department of GIS-specialists, which together with the aircraft form a mobile crew able to perform tasks promptly.

It was decided to start the work by flying over the Stary and Novy Bykov - villages located on the banks of the river Supiy, in the Bobrovitsky district of the Chernihiv region.

The total area of Stary and Novy Bykov is 1,040 hectares. UAV SKIF surveyed the territory of both settlements for 2 hours. As a result of the monitoring, an orthophotomap with 2 cm/pixel resolution was created, which clearly shows infrastructure destroyed and damaged by the occupants. 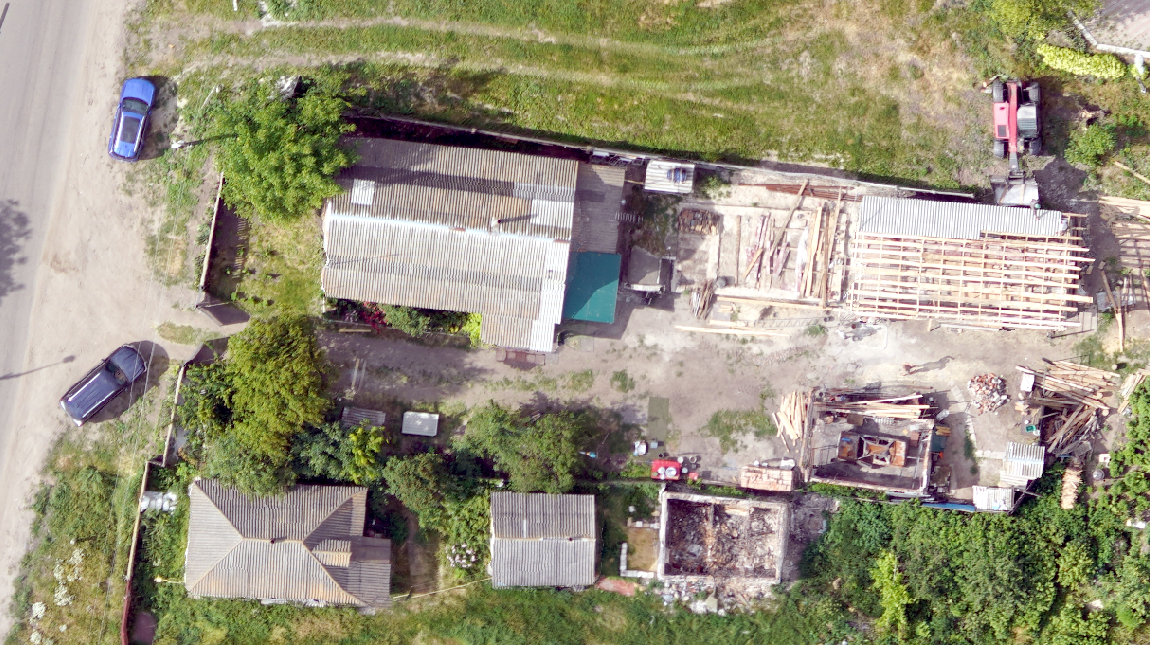 How remote monitoring has changed under new circumstances

The war has forced Culver Aviation to make changes to the usual algorithm of work at every stage of monitoring.

Under the current circumstances, preparations for flights require additional approvals and take place under heightened security measures. Therefore, the team of operators and surveyors was joined by a manager who took over communication and coordination with the military and the leadership of the united territorial community.

Since the villages of Staryi Bykov and Novyi Bykov had been under Russian occupation for almost a month, the Culver Aviation team had to take into account that the surveyed areas could be mined. Therefore, the work was conducted in close cooperation with the military: when coordinating the location of the flights, the territories where demining is taking place, as well as the algorithm of actions in case of an emergency landing of the aircraft in an unplanned place were established.

The orthophotomaps of the Old and New Bykov, prepared by Culver Aviation specialists, have been handed over to “russia will pay”. They are awaiting further analysis to calculate the losses that the terrorist country must compensate.

Culver Aviation is already preparing to monitor the following sites. Added to the Chernihiv region were the Brovarsky and Vyshgorodsky districts of the Kiev region, where many structures were damaged as a result of fierce battles with the occupiers.

Let's rebuild the country together!

Recall that Culver Aviation has recently launched a new direction of work — the creation of 3D models to assess the destruction to form a realistic picture of the state of objects. Our experts have already created a 3D model of the destroyed kindergarten. You can see it at the link.